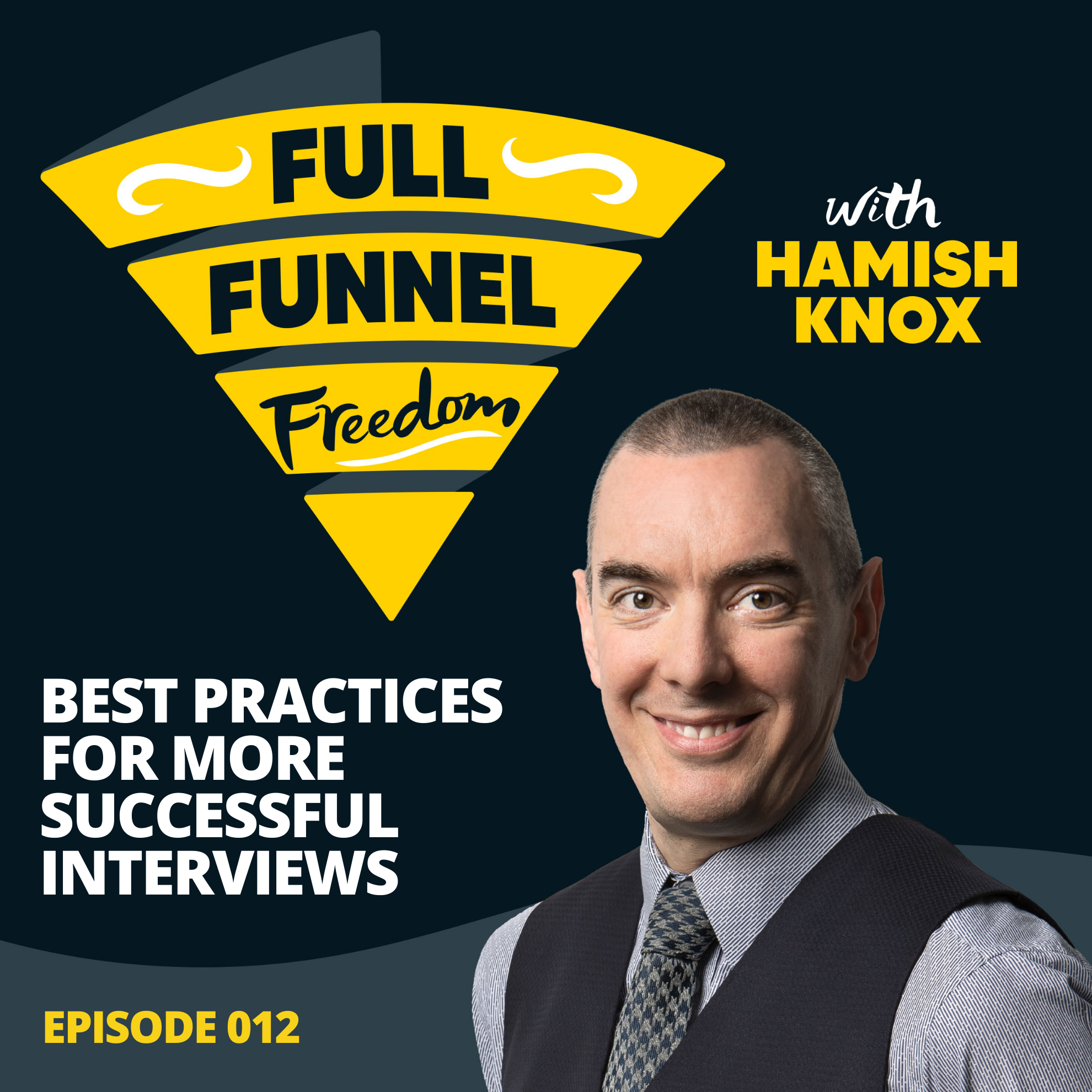 This is the full funnel freedom podcast, supporting sales leaders, and managers to improve their sales funnels from people to prospects. I'm Hamish Knox. In this show, you'll learn how you can improve your results. Lead a great team and hit more targets with full funnel freedom. Welcome to the full funnel freedom podcast.
I'm your host. In this episode, I'll be sharing ideas and insights around how we can make our interviews much more effective to weed out bad fit candidates. To join our team and create full funnel. Interviews are really a leader's version of what our salespeople are doing on prospecting and qualifying calls, but we at least theoretically, are doing that a little bit less often than our salespeople are out prospecting and doing qualifying meetings.

So when we look at our interview, First of all the phone interview, this is the first time that, of course we're probably connecting with our candidates voice to voice. And in previous episodes, I've talked about how we're really looking at creating a hiring process. That is a filter, not a fly trap. And we want to put as many hoops hurdles, friction.

However you want to characterize it in our process before we actually engage with a candidate voice to voice, because especially if we have an open role that we are maybe unconsciously desperate to fail, the minute we connect with someone, voice to voice, we're likely to fall in love with them. And we're likely to ignore any yellow and red flags that pop up because we're so desperate to hire the role and the person that we've spoken with naturally.

All of the right things that we wanted to hear, because of course they're selling themselves to us in order to get hired. Now, whether you do phone interviews or not best practices on a phone interview, first of all, keep it short, like really short we're talking 15 minutes or less, maybe 20, but keep it.

Keep it brief and figure out in that 15, 20 minutes, whether or not you actually would like to advance this person down their hiring funnel. Now whether you're doing this or you've delegated this to another member of your team, or you've got a separate person in your organization handling the phone interviews, keep them short.

The longer that the phone interview goes, the less likely it is that we're actually going to ignore yellow and red flags down the chain because we've already fallen. I recommend to the leaders that I work with three questions on their phone interviews, question one. What prompted you to apply? What made you say this was the role for me?

Question number two. Tell me what you know about insert company name and. Because they're going to roll up to me. I want to know what research have they done on me, not so I can get my emotional needs met or, or get smoke blown at me or anything like that. I want to know how well researched is this individual and how ambitious and driven are they to do the right things, to actually make it through my hiring funnel to get onto my.

Stay in the sales role, don't go into the management role. So I'm really listening on the phone interview. How is this person responding to me? What is their tonality like? Are they taking super long pauses to answer questions? And if they aren't responding in a way that I'm looking for, I want to be clear with them at the beginning of the call that either of us might say that they don't want to move forward.

With continuing as a candidate for this role several years ago, when I was hiring for my first associate, I, uh, had a candidate on the phone who to use a very current reference. Was it very similar to, uh, Eddie Murphy's wife in coming to America? And if you recall, Scene when he asked her, you know, what her favorite things were.

She would say, whatever you like. And that was really the response I was getting back from this candidate. When I said, you know, tell me about your goals for the next three years and where, what do you see yourself doing? It was very much whatever you like. And I said to this. You know, I, I don't really feel that you're a good fit for this role.

I appreciate your application best wishes to you. And they, to their credit asked me for some feedback. And I said, well, you really didn't sound like an individual. You, you were really just someone who was going to do whatever I wanted and at whatever I asked you to, and that's not the type of person I was looking for for the role.

So those are our. If the candidate makes it down our hiring funnel, when we get into the discovery call or we would call it a face-to-face interview, whether that's video, we're actually in the same physical space. One mistake that I've watched leaders make over and over and over again is ask questions where the only response is whatever they want.

For example. So tell me how you would manage a sales team. There's literally no way for a candidate who has any sort of cognitive abilities to answer that question without sounding like the best candidate ever. Where I coach the leaders I work with to do is ask about past experiences and usually through questions that are framed around a situation.

An action that the candidate took and the result from that action. So if we go with a sales manager example, we might have. So Hamish, tell me about a time where you had an underperforming employee and what did you do to get them back to the performance level that they had either achieved before, or that you, you believe that they could get to?

It sounds like a great question. However, even if the response back is, well, you know, I, I coached them. I did this, I did that. We did a performance improvement. If we stop there, big, big, big misstep on our part danger alerts under surface level interviews. Think about the picture of the crocodile. Who's just, you can barely see their snow.

Maybe their eyes hanging above the wall. All the dangerous stuff is below the surface. So when our candidate responds to that situation, action result question with what we hope is a answer that continues to want us to keep them in their hiring funnel. What we want to do is dig underneath that surface level answer.

So you might say. Hamish. That sounds good. Walk me through specifically, how did you identify that they were having a performance issue before you got their monthly sales results, which by the way are lagging indicators. And that means the problem is already well down the. I'd rather be focused on leading indicators, which is what I'm hoping to hear from my candidate.

That's a really key question because it might be that in my previous role, I did some version of the beatings will continue until morale improves. And my underperforming sales person bumped themselves back up briefly. But then as soon as I wasn't watching them and basically micromanaging them, they went right back to their comfort zone and went right back to their underperformance, which, uh, one of the leaders I work with refers to as porpoising, which I quite like.

So when we're doing interviews, we want to be focused on gathering information about past experiences that our candidates have. Because past behavior is indicative of future behavior because as humans, we tend to be creatures of our comfort zones. And so if we are comfortable managing a sales team or a particular way, unless we have a real incentive to change, we are likely to stay in that comfort zone.

And by uncovering our past experiences in the interview, we can discover whether or not we want to keep this candidate in our hiring funnel. So. Phone interviews, keep them short, three questions. Max, we want to ask about the significant accomplishment in a role specific way in the past year to understand what our candidate considers significant.

And then when we get into the in-person interviews, we want to really be digging underneath the surface of their answers and not asking questions where the only answer is everything that we want to hear in order to hire this interview. This has been the full funnel of freedom podcast. I've been your host Hamish Knox.

7 Words to Definitely Use While Managing