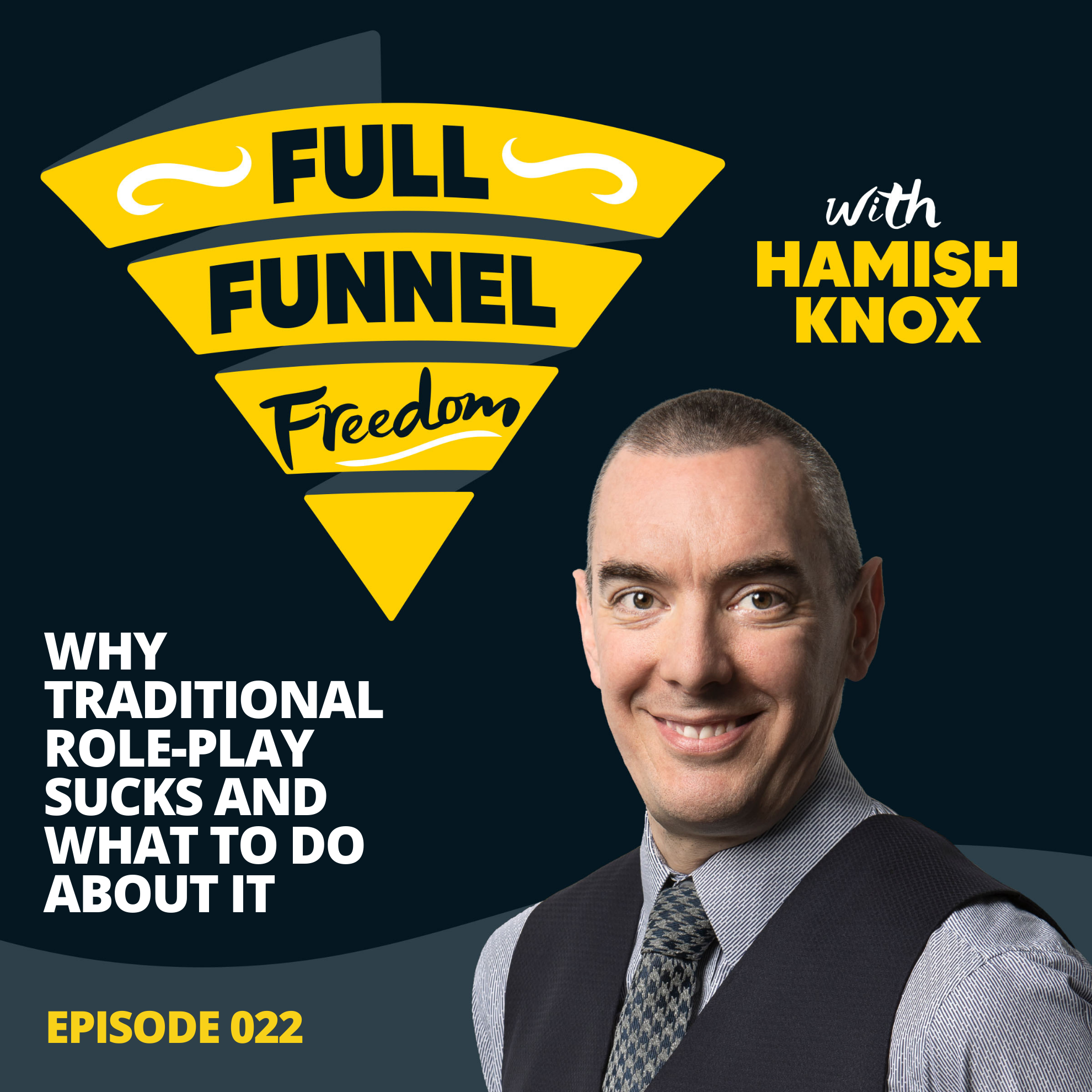 I'm your host. Hamish Knox. In this episode, I will share ideas and insight around role-play and why it is the single best activity we can do as leaders to develop our team and create full funnel freedom full disclosure. Many years ago, back when I worked at Canada Newswire I wrote a blog post it's probably still available somewhere on the internet about how role-play was completely horrible and it socked, and it was a complete waste of time.

But the managers that I role played with would essentially play the boogie prospect who really never existed, or maybe it happened to them once early in their careers, however many years ago that was, and then they would take all that stuff out on me. So when we're, role-playing want to keep several things in mind, The first thing is we want to give a brief review of the role-play want to give our team members a heads up that we are going to play.

One of the single most terrifying things that we can do to our people is to say, all right, let's role play. There are scenarios where we might do that. If you know, one of our people pops up on a chat, or if we're in the same physical space and they knock on our door and say, Hey boss got a minute. Can we talk about this?

And as we're learning what the scenario is, we might say, be okay to role play. Well, our person has already come and asked for our support. So they're usually more open to that. But if out of the blue, we just decided to whip, play on our team, usually an opportunity for things to go dramatically sideways.

Very, very quickly. The other thing we want to do with role-play is too thin. Andrew's Erickson, who is the scientist behind the 10,000 hour rule that Malcolm Gladwell misquoted his research has actually found in the book called peak. So if you want to read the, the real story of the 10,000 hour rule, check out the book peak by Anders, Ericsson, who unfortunately passed away year or so.

He talks about the idea of thin slicing or deliberate practice. So instead of role-playing a prospecting call, let's just role play the thin slice of what happens when a prospect says, yeah, that sounds interesting. But do you have a website I can check out and I'll call you back. If I want to keep talking.

Bye thin slicing those scenarios over and over and over again, we start to develop some muscle memory. There's a great quote. I heard on an audio book summary, and I cannot remember the name of the book, but the quote is from the SRO tribe, which is in Indonesia. And that quote is knowledge is rumor until it lives in the muscle.

And I've spoken on previous podcasts about how most people, when they develop an awareness of a skill gap or a knowledge gap, they go out and they acquire knowledge. And as soon as they've acquired the knowledge, however, they acquire that knowledge via book, up video podcast, whatever they say I have acquired.

My gap is full. However, if they never put that knowledge into application, it's completely useless. So then slicing are common scenarios with our salespeople allows us to build up these little micro moments of muscle memory that when used out in the field actually enabled them to take a conversation in a different room.

Do you use a really, really dated reference? It's kind of like how Roger Bannister broke the four minute mile. And this is a rather personal story because I learned that my grandfather on my mother's side was watching Roger Bannister break the four-minute mile instead of being in the delivery room with my grandmother, when my mom was being born.

So there's a little bit of a personal connection to that for me. But what Roger banister decided to do is not to try to run four miles as fast as he could. It was to break it down into one mile chunks. And so if you could run a mile faster mile, faster mile faster, you would get. There's a lot of cliches out there about how golfers only choose one club professional golfers that is only choose one club to practice on.

And that might sound boring and mineral. The fact of matter is role-play when done properly is actually really inspiring. Another challenge that role-play often has though, is the use of scripts. Well, I don't know about you, but I don't give my prospect a script. So practicing via scripts is mostly useless.

And in fact, uh, one company I'm familiar with hired an inside sales person gave them this great script. And the first day that they were allowed to be making prospecting calls, they were overheard to say, good morning, And that person, of course didn't work out very long in that role, but it goes to the fact that Scripps has we're still for now selling to human beings are largely useless.

What we coach our clients to do is use the principles of improvise to give our team members a platform, which is an improv term for the setting of the. So I mentioned we got to give a preview, so we're going to hell. If it's a one-on-one coaching session, we're going to tell our sales person that we are going to do some role-play with them in our coaching session.

And we want to specifically role play on this specific thin slice of a scenario of an interaction with a client or a prospect. It's probably something that we've heard them say in our Monday check-out or check in or in our sales farm review meeting. When they're talking about an opportunity that's maybe stalled in the.

So tell them that we're going to do it and then give them a platform or a setting. So where are we? Who are we talking to? What got us to this point? So if we use the example of we're on a prospecting call and the prospect that said, yeah. You know what sounds interesting? How about you, uh, send me your website or tell me what your website is and I'll call you back.

And then what, how do we escape this scene? So we have to give an end point or a scene ends when. Because if we don't give our people out for role-play, they're eventually going to feel like there's, they're in a dark tunnel and they see a light at the end of it, but they're pretty sure that that light is a train.

Play the single scariest non-committal prospect that they've ever encountered and what we can demonstrate to them because we're practicing. And because I mentioned, like I mentioned, on a previous episode, we're not here to get our emotional needs met as leaders. They can buffet us with all this. You know, non-committal wishy washy while, you know, with apples to apples, hyper prospect, and we can remain home and present and demonstrate to our salesperson what to do in the moment with that prospect when they're talking like that.

So we go first, we role-play, as the sales person, our team member role plays as a prospect, then we do a debrief very quick. Debrief. Debrief is one of the most important parts of role-play do not. So I would say to my Salesforce, You know, Ethan, how did that sound to you? What, what resonated with you? What didn't resonate with you?

What made you feel uncomfortable? And then my sales person says, well, this and this and this felt great. This didn't sound so good. And maybe I changed this a little bit. I say, great. Well, how would you say it? Because we all want to get to the mountain tops, but you're going to get there in your way. Not my way.

So how would you say so salesperson tells me how they would actually say what I said, how would they get to those mountaintops? And then I say, great, let's do that. I play salesperson again, but I'm going to use their words and what's fascinating is human beings tend to not to listen to the words that come out of their mouth the first time they say them, which is why, when someone says something that seems completely nonsensical to us, we might say, so what I heard you say was, and we restate back exactly what they said, because it gives them a hard moment to go, oh, did I really just say that dumb thing?

Oh, I didn't actually mean that. So we're going to role play again, a salesperson using our team members, words, we debrief it. How'd that sound to you. And they're probably going to say, oh, that sounded great. Of course it did because it's their words. Then we flip roles and they play, they now get to play the salesperson because they've seen the mountain tops twice.

They've seen the scene. They know what to do, and then they get to role play, and then they get to debrief. When I'm debriefing with, with my salespeople, I will go along the lines of commands recommends, and I wish you had. Command is, Hey, you did this great recommend is, and might need to work on this a little bit.

Maybe we'll practice that a bit more. And I wish you had is usually around a phrase of, I wish you had asked me this question, or I felt like this was a moment too, and it's not pejorative. We're not going critical on them. It's watching the game film right after the game has ended and saying, see, when we went right this time, maybe next time we're going to go left.

So doing those quick debriefs in the moment is really crucial to instilling the new neural pathways that we want our sales people to have. And so they can hit the mountain tops. We want them to hit in their way. So it sounds conversational, but still creating full funnel freedom, according to our process and our system.

Now this may sound like a whole ton of time to you. In fact, the matter is when I had my first sales person on my team, I could do everything that we just talked about in 20 minutes. I played twice. They play once three debriefs in 20 minutes or less, because again, it was a thin slice. Our scene was somewhere between 90 seconds and maybe three minutes.

And so it doesn't have to be a ton of time, but it is the single best way to develop your people and get them on the path to creating full funnel. This has been the full funnel freedom podcast. I've been your host Haymitch Knox. Thanks for listening, please like, and share rate and review. Follow us on Instagram at Sandler in YYC or connect with me on LinkedIn until we connect on the next episode.

How Do You Manage a Mountain of Inbound Leads? with Dan Wardle from Vidyard

Hamish Knox: This is the full funnel freedom podcast, supporting sales leaders, and managers to...