7 Words to Definitely Use While Managing 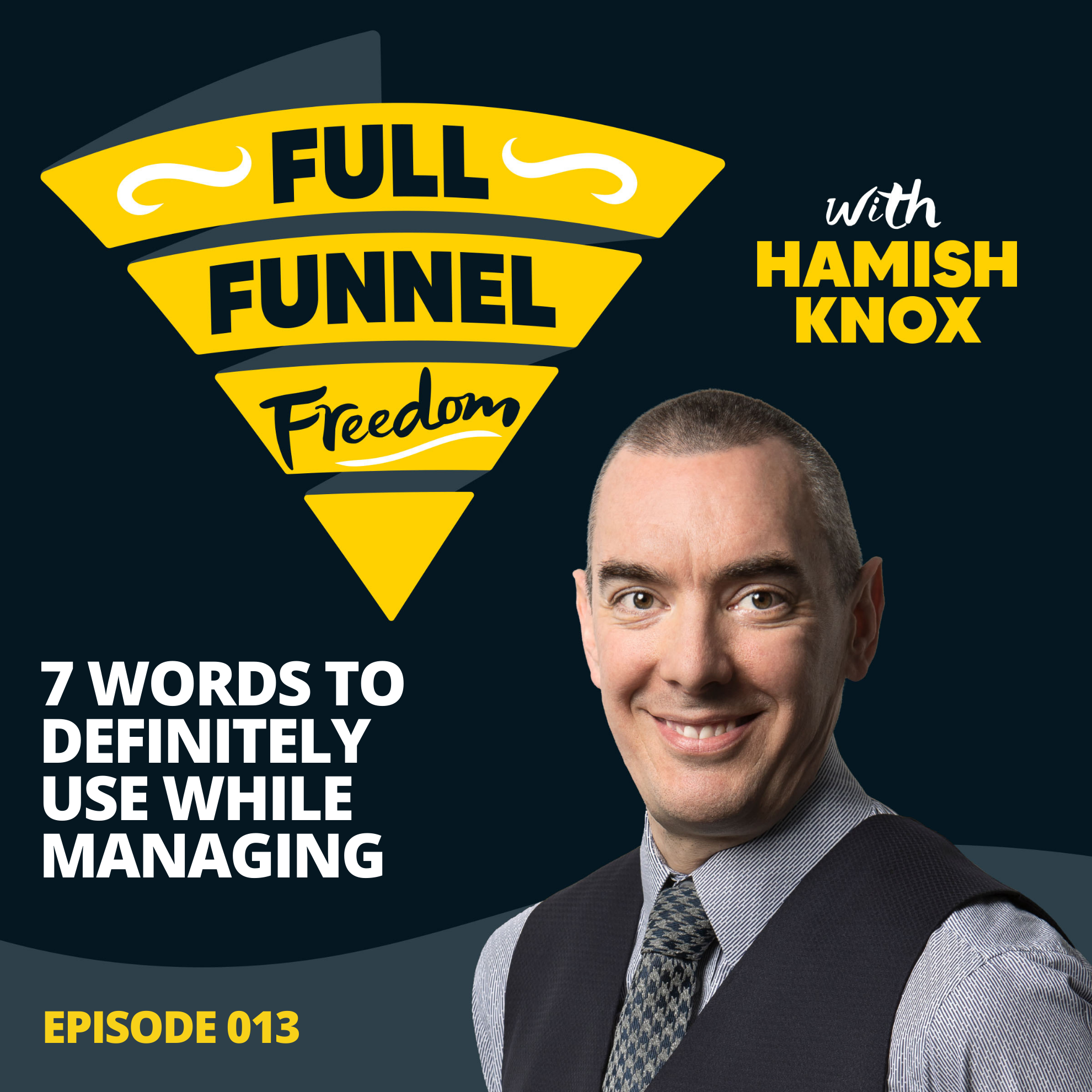 This is the full funnel freedom podcast, supporting sales leaders, and managers to improve their sales funnels from people to prospects. I'm Hamish Knox. In this show, you'll learn how you can improve your results. Lead a great team and hit more targets with. Funnel freedom. Welcome to the full funnel freedom podcast.
I'm your host, Hamish Knox. In this episode, I will share ideas and insights around seven words you can definitely use when leading your teams that will create clarity and motivation with your salespeople on the road to full funnel. I love language. I started listening to George Carlin when I was eight years old.

Some of you were thinking everything makes sense now. And he had a bit years ago called seven words. You can never see on television, even though it's about 50 years old. I don't recommend you look for it or listen to it at work or where there may be a sensitive ears around. But if we look at our language, there are words that we use that can increase mental or emotional friction.

Which are the recipient, which reduces our potential for successfully convincing someone to do something, managing our people, creating full funnel freedom, or whatever we are trying to accomplish. So as Socrates said, an unexamined life isn't worth living. We want to examine our language, not so we can be language police, but understand how are we potentially causing mental and emotional friction in our recipient that is reducing the potential for us to get them to do what we're asking them.

It doesn't matter what we say. It matters what they hear. So we may say something to one of our team members that we think is very clear, very straightforward, very simple to implement. And they're thinking that we just asked them to go climb a mountain with a shoe wise. So the first of those words is when, and this is actually related to what my friend Antonio Garrido talked about in his book, asking questions, the Sandler.

Which is a presumptive question. That sounds like. So when you great question to use when we're debriefing our direct reports and presuming that they are following our sales process and our selling system, we can say, so when you ask your prospect about how much money they had set aside for this. What did they say now if our sales person starts to dissemble and say, well, you know, uh, I think they might have this or that as a coaching opportunity.

It's not a gotcha moment. But using those presumptive questions strategically can let our salesperson self-discover that men, maybe they weren't. So, uh, adherent to our sales processes, we necessarily want. The next word is never. And we'll probably dive into this more in a future episode, but never is around the idea of how do we never have this conversation.

Again, usually this comes up when we've had a conversation with a, one of our direct reports about them not being in alignment with our sales process, one of their proactive activities. Their commitments to us. And as much as they've promised to get back on pace, they haven't. And we did talk about it in a previous episode that we're about watching someone's behavior, not necessarily listening to what they say, certainly want to hear what they say.

Certainly believe that they're going to do it. The true commitment is actually when they demonstrate that they're changing their behavior. So the word never is a really nice way of establishing with one of our direct reports. This is the last time we're having this conversation without potentially having them have a moment and start looking at polishing their resume.

It certainly can happen if we're very aggressive with this, but very gently, very simply saying Hamish. We've had this conversation several times. I never want to have it again. How do we move forward from here allows our direct report to create their own path forward. And when they create it, they own, the next word is time.

And on a previous episode on, we talked about how to frame our interview questions so we can actually. Get real answers instead of the answers that our candidate wants to tell us. And so that might sound like, tell me about a time when you, and then we let our candidate give us some, some information. Of course, we're going to dive below the surface of their answer.

So we're not just getting smoke blown at us. But tell me about a time when you great way to gather information that is more real than an answer or a candidate makes up just so they can get. The next word is a very scary word and we're definitely going to dive into it in future episodes. And that word is play as in role play.

I also call it practice because really that's what we're doing or practicing, but role play can be a very, very scary phrase for a lot of salespeople and even a lot of managers. And we'll dive into more on that in a future episode. The word play is great because we're all kids, we're all big kids and we love to play.

Or they might say, well, you know, I've got this big presentation on Thursday and I'm going to be working on both of them. So if the presentation takes me a little bit longer, I might not be able to get it to your Friday at noon, which then we can say, because it's an emotional conversation without the emotion.

So Hamish fair enough. Let's say that comes to pass. What are you going to do to let me know? And when would you be able to get me what I'm looking for? If it's not Friday at noon, so it's not going to overwhelm you by asking that question. It's an emotional conversation without the emotion. Cause the emotion.

If it's Friday at 1159, and I send you an email that says, Hey boss, so sorry, presentation took too long. Uh, not gonna make it now, we're having an emotional conversation, but in the present, we can have this emotional conversation about the future without the emotion. Then you're allowed to say to me, Hey, that works for me.

You know what I appreciate. You can get it to me by Friday at five. I really, really need it by Friday at three how's that sound. And now we've co built a solution together, mostly from my data, which I'm more likely to own and more likely to execute. But by giving me this space, you're actually motivated me to really hit that deadline by noon.

And if things go completely sideways, I'll get it to you by three. The next word is because this is a great one word question. In response to a direct report telling us that they're going to do something with a client or prospect. So in one of our one-on-one meetings with a direct report, they say, well, I'm presenting to the Henderson account next week.

And we say, because very gently, very softly. And we grease the wheels of gathering more information and supporting our direct report in thinking about why are they actually going to go do that? Now if they say, oh, because they asked me for a proposal, maybe our, uh, our direct report is not following our sales process or our system.

And our funnel is going to start to look a little bloated in the middle. So this is the starting point of a conversation about, are you actually following the process? Very nice gentle question, which our direct report doesn't even hear by the way, at a conscious level, they don't hear it, but at a subconscious level, their brain says we have been asked a question and therefore we must answer it.

So using, because strategically when a direct report tells us I'm going to do something, allows us to make sure and uncover whether or not they are doing it for the right reasons. Or just because they were asked the last word in the seven words that you can definitely use when managing to create clarity and lead your team to full funnel.

Freedom is next as in. So what's coming up next with the Henderson account. Great question to ask our account managers who are looking to land and expand, sell more stuff to more people or people who are already buying from us, but also. For our salespeople who are hunting, especially if it's a longer sale, because the longer a sale goes on, sometimes things can kind of drag.

And we can gather some information from our sales manager. Again, the seven words that you can definitely use when managing to create clarity, which is our number one job as leaders and motivate our team to full funnel. Freedom are when. Time play, prevent because, and net. This has been the full funnel freedom podcast.