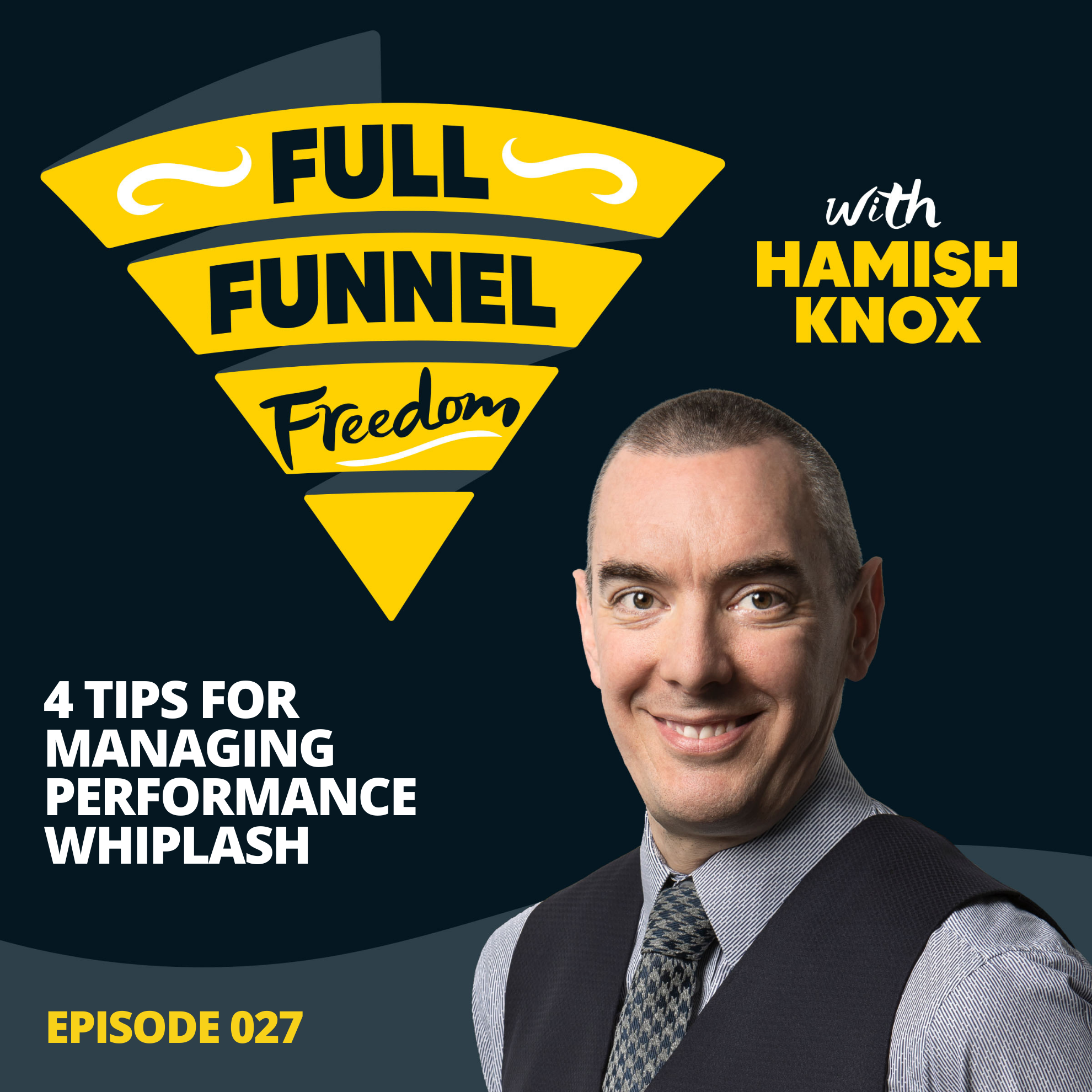 This is the full funnel, freedom podcast, supporting sales leaders, and managers to improve their sales funnels from people to prospects. I'm Hamish Knox in this show, you'll learn how you can improve your results. I lead a great team and hit more targets with full funnel freedom. Welcome to the full funnel freedom podcast.
I'm your host Hamish Knox. In this episode, I'll be sharing ideas and insights around managing performance whiplash with your sales. Performance whiplash or one of my long-time clients calls porpoising is best illustrated through the story of Eddie. So Eddie has been on the team for three years and his performance varies from all-star one month to his manager thinking, why did I hire this guy the next month over and over and over and over again.

And at this point, Eddie's manager really feels lost. He, they feel that they've tried everything from coaching, tough love, threats, training, and none of it has worked well. Part of this is Eddie's manager's fault because they have established a culture on the team of allowing. Performance whiplash because corporate culture is the behavior that's approved implicitly or explicitly.

And by allowing Eddie to continue to go on this roller coaster of performance on a month to month basis. Eddie's is essentially saying that's okay. I love the highs. I'll hate the lows, but overall, everything evens out and we don't necessarily want to go on that emotional roller coaster on a monthly basis because we're going to burn a ton of mental and emotional energy when we're on the downslide.

And then when we're on the upswing, we're going to be spending a ton of mental and emotional energy. Thinking about the next downstream. So we really want to avoid having a rollercoaster of performance with our reps. So there are four best practices that I recommend to my clients for managing performance whiplash.

The first best practice which has been mentioned on previous podcast is to create clarity from the first day that one of our salespeople is onboard. And in fact, we want to create that clarity. Even before we've extended a letter of offer for them to join the team. Now, if we are taking over an already existing sales team, then we are going to be creating that clarity from our first day in the role and clarity around.

Proactive activities. What are the activities that we want to see from our team on a daily, weekly, monthly basis to demonstrate that they are doing the right things, to put, qualify them through the funnel, close them, and then land and expand whether that's all one role in the organization or whether that's performed by multiple roles.

Performing those proactive activities. I will preview the consequence conversation later in this episode by saying the first consequence is not you're fired. That's just silly. And I'll expand more on that later. The second best practice is to always be recruiting. Just like, it's easier for one of our salespeople to be gutsy with a prospect when they have lots of real opportunities in their funnel and their funnel actually looks like a funnel.

It's easier for us as leaders to be gutsy with an underperforming employee, even if they are in theory, one of our top performers, because they're high highs or maybe outweighing their low lows on the rollercoaster. If we have a strong bench or to use a sports analogy, American sports analogy, farm system of potential replacements.

It's way easier for us to not let the performance roller coaster continue on for very long best practice. Number three is to correct the under-performance in real time. So what. This also means is we want to have that regular cadence, ideally weekly of check-ins and check-outs, which was talked about one of the first episodes of full funnel freedom with each of our salespeople individually, it's gotta be individual so we can have an early warning system of potential under-performance.

And then the following month, they're back on the rollercoaster going down, we're back into the emotional and mental energy drain. Copy paste repeat. So we want to be able to correct underperformance in real time using our reps own data and getting them in our checkouts to define how are they going to get back on pace.

So if their performance is off one week, that's okay. Everyone's allowed to have a bad week every now and then, but we want our rep to build. With us, their plan for getting back on pace, because otherwise they're going to end up in heartache and tears when they don't make their bonuses or commissions.

And we are going to end up having to have a tough conversation with this rep that we'd probably rather avoid best practice. Number four. Is implement consequences as they are earned. So just like we want to correct under-performance in real time, we want to implement the consequences as they're earned now, for anyone who has small children or was a small child, pretty safe to say that our parents never got the.

They understand from our behavior that it's never going to happen. So we want to build a consequence ladder and the initial stages of that consequence. Are probably pretty minor. And you know, the first step for underperformance is likely going to be, make it up before the end of the next week or the end of the next check-in then we're going to escalate from there.

Yeah, of course. At some point we're going to have to, uh, talk about performance improvement plans and termination by. From my experience. If we have consequences, minor consequences that are implemented early, and then there's a way for the rep to get off the consequence ladder, right. We never want to be on double, super secret probation for the rest of our lives because.

Our rep is thinking more about, they don't want to have a third strike as opposed to actually performing in the way that we want them to. So there's gotta be a way that they can get off the consequence ladder. So for example, if consequence number one is they've got to make up their proactive behaviors by the end of the next week, or by the time we check in again, and they do that off the constant.

This might sound like a lot of work to some leaders, but in reality, our reps are probably not going to be on the consequence ladder very often because they've built their proactive prospecting plans in collaboration with us, we've been clear with our expectations, not only with performance in terms of proactive activity, but also.

With what the consequences are. So there's clarity and our team knows the box that they're playing in and they can stay within the box. And if they occasionally stray outside, fine, it's a little minor consequence that they can likely easily make up. If they're motivated to, if they're not well, that they're indicating that through their behavior.

So when we look at performance whiplash, we can avoid it. If we are creating clarity from the first. Correcting performance in real time, both with the proactive activities that are expected as well as the consequences for not performing. And we can have the confidence to do that. If we are always recruiting, always adding to our bench strength.

So if we do end up having to make a change on our team, we can fill that spot relatively easily with a good fit or a potential good fit at least. And because we're implementing the consequences as they're earned that boosts our credibility with our team. Again, the four best practices for managing performance whiplash is to create clarity from the first day, both in terms of what are the proactive activities expected as well as the consequences for not performing always be recruiting, correct under performance in real time.

GoCreate full funnel. Freedom. Thank you for listening to full funnel freedom with Amish knocks. If you want to increase your sales with ease, go to full funnel, freedom.com.

How to Run an Effective Sales Team

Why Upsell is a Dirty Word in Sales