How Maintaining Full Funnel Freedom is Like Flying an Airplane 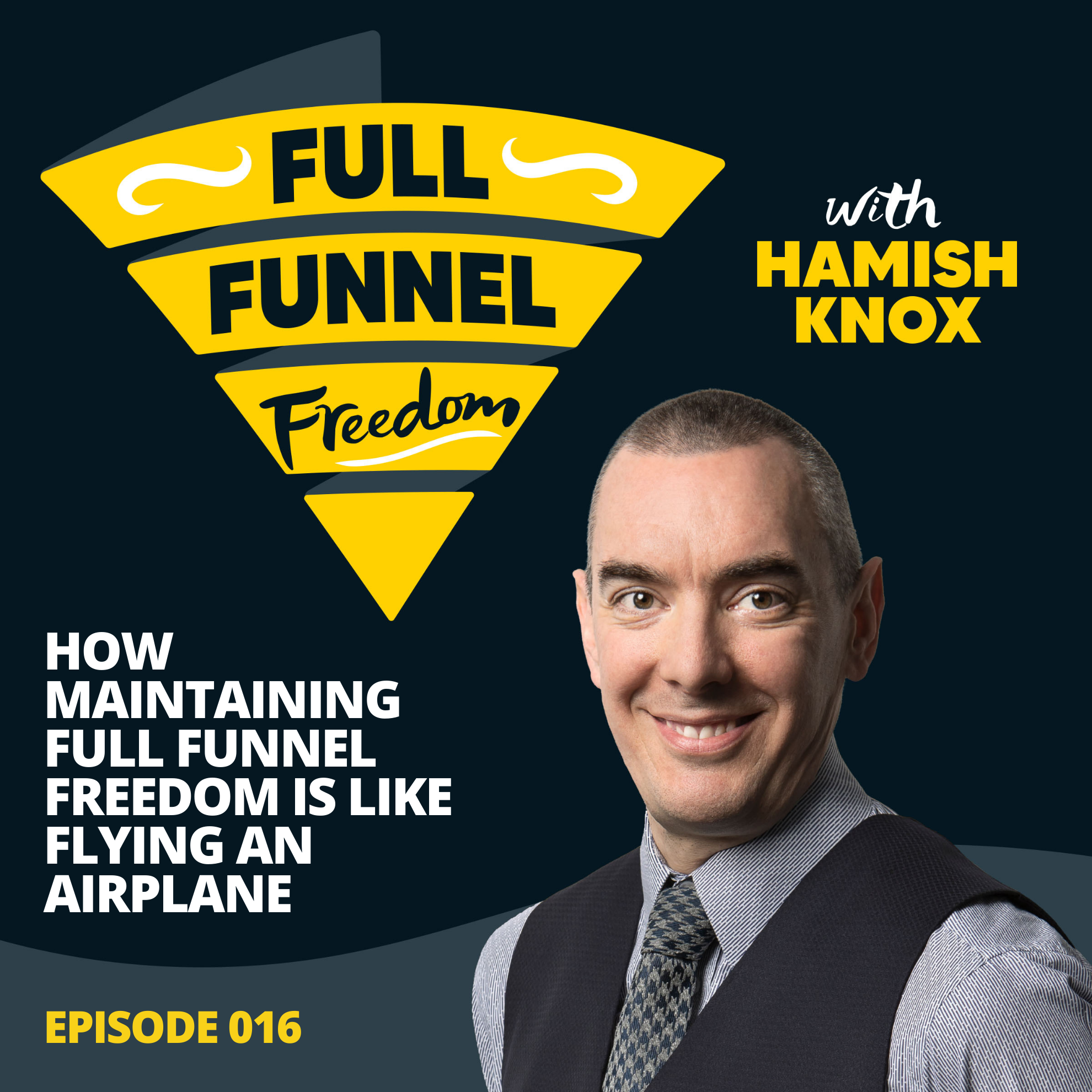 This is the full funnel freedom podcast, supporting sales leaders, and managers to improve their sales funnels from people to prospects. I'm Hamish Knox. In this show, you'll learn how you can improve your results. Lead a great team and hit more targets with. The funnel freedom. Welcome to the full funnel freedom podcast.
I'm your host Hamish Knox. In this episode, I will share ideas and insights around how maintaining full funnel freedom is like flying an airplane. A couple of years ago, I read that an airplane, no matter how long or short the flight is off course, 95% of the time. So the pilots are constantly needing to make these little minor adjustments to make sure that they end up the right destination and even a flight from Calgary where I'm based to Vancouver, which is less than an hour.

The plane is still off course, 95% of the time. So we always need to have these little warning signs and ways of testing and understanding where are we at in order to make sure that we end up at the right destination and in our case, keep that funnel consistently reliably and repeatably. That's where those weekly check-ins and check-outs with our salespeople is really, really critical because it gives us the yellow flags and possibly red flags early enough that we're able to make course corrections without doing anything too extreme, which creates some unintended consequences, which I'll talk about a little bit later.

And also what is their key performance indicator? What are, what are they intended to get to on a weekly basis, whether they're in an account management role or a hunter role in order to keep that funnel consistently and reliably. One thing that I've seen in some organizations is they measure followup calls.

So had an initial conversation with someone, but then we have a tracking system for follow-up calls. Does nothing more than really make our reps feel good and maybe adds another dial to our dashboard. That is really not telling us very much. The key metric is, did you have an initial call that led to a discovery meeting?

So if you're currently tracking anything other than initial calls, drop it out of your dashboard, your dashboard will appear a lot cleaner and a lot easier for you to find out whether or not your team is on pace to keep your funnel consistently. The other thing that a lot of organizations measure is second meetings, proposal meetings, presentations, demos.

And if that's advancing the business, if that is a really key metric, that is, that is going to support you in creating full funnel freedom. Keep going, however. From my experience, measuring anything after the number of discovery meetings booked and held is really irrelevant to the process because the other metric that we want to be looking at is what opportunities are being added, advanced and removed from our funnel every week.

Whether because they were disqualified by one of our salespeople or because they were brought across the finish line and that prospect is now a client, or we've expanded a relationship with an existing. Key reason to measure both discovery meetings, booked and held is because the biggest cost of sales is blown appointments.

Now, even in a world where a lot of our salespeople are working from their homes or, or not at the very least being in the same physical space as their prospects. If they get blown off by a prospect for a scheduled meeting, I'm very confident in saying they ain't jumping back on the phone to make a prospect and calls.

So what we want to do is track discovery meetings booked and held and get a bit of a metric in terms of how many discovery meetings that go in our calendars actually happen based on some feedback I got from one of my coaches several years ago, if that number is less than 86%. That's a big yellow flag that our salespeople are probably not qualifying their, their prospects well enough before they book a discovery meeting with them.

And in fact may just be saying, yeah, sure. I'll meet with you or yeah, sure. I'll do a demo just because someone called up and asked for it and they're not necessarily owning the process. So somewhere in that 86 plus percent range is what we're looking for. Discovery meetings booked to. I can tell you many, many years ago, my ratio was about 67.

And naturally, most of the. Prospects weren't even prospects. They were suspects who were kicking my tires and they ghosted me, but I was running around doing a whole bunch of frantic activity, trying to reach a goal that was really just a dumb goal. To begin with. Goal setting is a completely separate conversation that we'll address on a future episode.

But what we want to be looking at is creating a dashboard for us and then rolling it down to our salespeople. That gives us a clear. Indication as to are we off pays even just slightly so we can course correct. 'cause the last thing that we want to be doing is effectively yelling to our sales team at the end of the month or the end of the quarter, pull up, pull up, pull up because quite frankly, by that point, it's probably too late for us to pull up.

It's probably too late for us to course correct. And as I mentioned earlier, it creates some unintended knock on consequences with our salespeople and with our clients and prospects. For our salespeople, some of them are going to wait around until it's frantic enough for us to be yelling at them, to pull up and course-correct, and then they're going to go, go do the activities that they should have been doing.

Anyways. Also it creates a lot of mental and emotional pressure on our, on us and our entire salespeople, which is not sustainable longterm. And then from our prospects and our client. As my friend mark has Koki has shared on his podcast. They get trained to wait till the end of the month or the end of the quarter.

And then magically when our salespeople are under a whole bunch of pressure and are willing to say and do things that are not in their best interest or the best interest of our company, like offer a discount for no reason or add in extra services or features that we would normally get paid for.

Because they're desperate to close a deal so we can pull back up and get back on pace, our prospects and clients learn to wait and understand that, you know, if we just delay this long enough, I bet we're going to get a better deal from that salesperson because they're eventually going to come to us at the end of the month at the end of the quarter and say, Hey, I know I said it was this price couple of weeks ago.

If we could do it for this price before the end of the month, would you sign up? Of course, the prospect is going to take a free discount. It's often how we talk about in training sessions, where a prospect says, Hey, can you have a discount? And one of our salespeople automatically spits out. Yeah. How about 10%?

And our prospects probably thinking, well, I was hoping for three, but you ain't getting the extra seven points back. So one of the things that we coach our leaders to coach our salespeople to do is when someone says, Hey, can I have a fill in the blank, a discount, an extra feature, better payment terms, whatever.

All we say back to them is sure. What were you thinking? And in fact, very early on in my career in Sandler, uh, I closed a client who ended up paying me significantly more than I thought they would, because I asked them to tell me what the discount they were wanting. Instead of me giving something to them that would have ended up being significantly less than they ended up investing with me over the course of three.

So as we are creating consistent, repeatable, reliable, full funnel freedom in our organization, we want to keep our dashboard consistently giving us the information that we need to know on a weekly and monthly basis. So we can avoid the pull up, pull up conversation at the end of the month at the end of the quarter.

And then what opportunities are being added advanced or removed from our funnel with those indicators in place, we have a much better chance of keeping our airplane on the right course. We're able to make little minor course corrections with our salespeople, that don't result in a bunch of mental and emotional calories being burned and our prospects and clients getting trained to just wait a little bit longer and eventually the deal is going to get better.

Hamish Knox: This is the full funnel freedom podcast, supporting sales leaders, and managers to...