Is Your Sales Year Already Over? 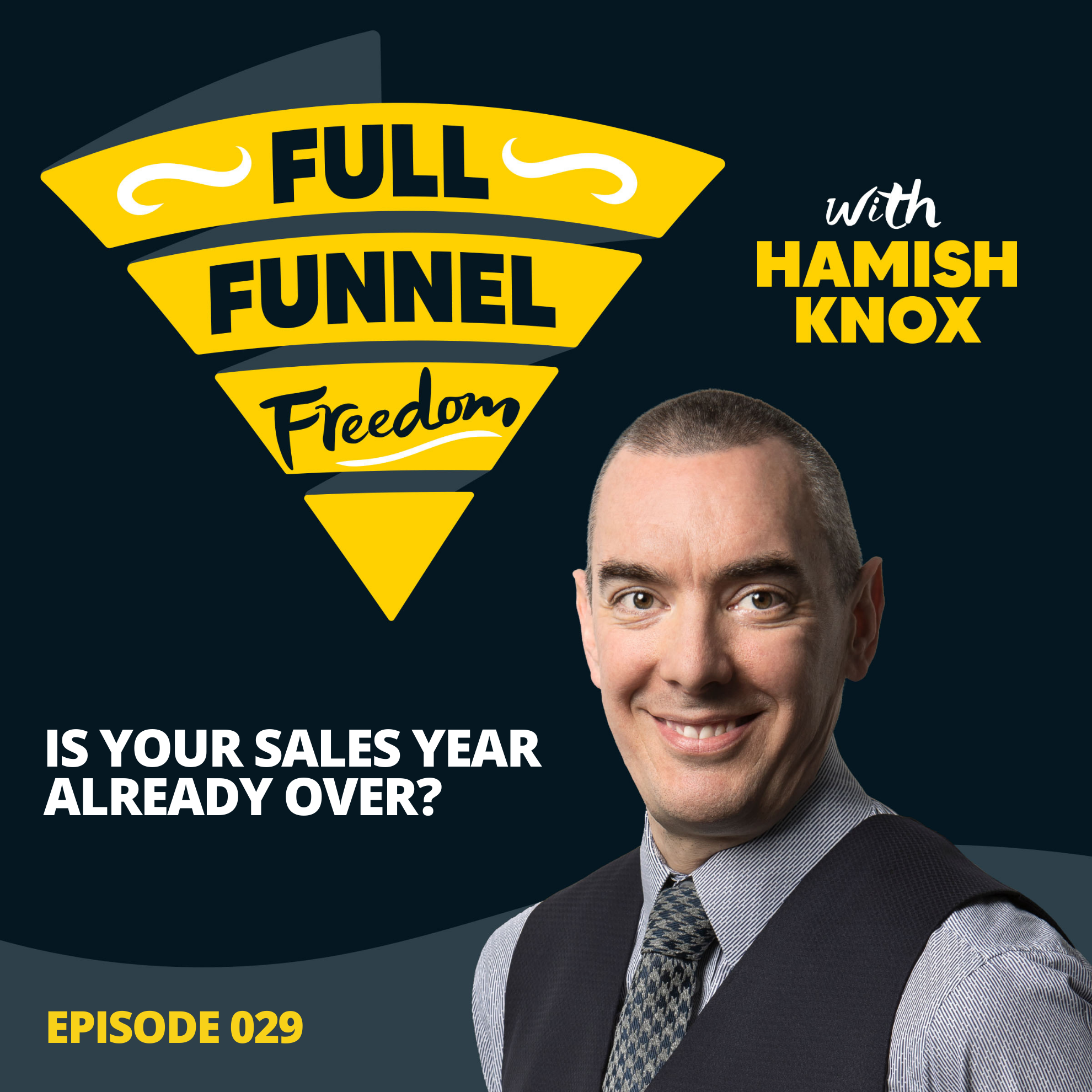 This is the full funnel freedom podcast, supporting sales leaders, and managers to improve their sales funnels from people to prospects. I'm Hamish Knox. In this show, you'll learn how you can improve your results. Lead a great team and hit more targets with full funnel freedom. Welcome to the full funnel of freedom podcast.
I'm your host Hamish Knox today. I'll be sharing ideas and insights around your sales a year and answering the question. What happens if your sales year is already over? So what the heck is our sales year? Well, we have our fiscal year. We have our calendar year. Well, our sales year is the amount of time that it takes for us to close a deal within our fiscal year.

It could be shorter, but on average it is six months. Well, our sales cycles not actually six months because. Paraphrase a Sandler rule. The sale is actually closed when we get paid and something that's. A lot of our salespeople don't actually think about, but it does directly relate to their commission because for most compensation structures, commission is only earned or paid out when the money actually hits the bank.

And from a cashflow perspective, that's a great idea anyways. So if we think of. Our sales cycle is about six months from hello to close, but it takes an additional 30 days to get paid. It's actually a seven month sales cycle, which means that whatever is in the funnel as of may, one is the stuff that we're going to get paid on before the end of our year, which would in this example is December 3rd.

So, what does this all have to do with creating full funnel, freedom your organization? Well, if, if we want to keep our funnels consistently reliably full, we need to be having our salespeople consistently proactively filling our funnel because we probably want to close business all the way through the year in general.

But if we are not consistently adding new opportunities to the funnel, and especially in this example, And it's going to take seven months for money to come in from hello, to looking forward, to working with you. A lot of the business that we are going to close early in the year is going to have been originated around the middle of the previous year.

A lot of our clients, when they first get engaged with us, they hear about proactive prospecting. And they're usually doing it in some form or fashion by. Especially those of them that are in a longer sales cycle of say six months or more, they forget about the proactive activities that they did early on, or the seeds that they planted that then sprout up and are harvestable 6, 7, 8, 9 months.

So when we look at our sales year as a tool to motivate our salespeople, the other component to this is the back-loaded sales pipeline, which holds a lot of sales leaders, hostage and stop listening. If you've never, ever heard this phrase, or maybe said it when you were in a sales role of, Hey, don't worry.

And then the first week of the following month or the first week of the next quarter, you heard a lot of, well, you know, they had to push things back in a. Times are tough and we couldn't give them a discount, which is all nonsense. We, we want to break the hostage bond of a back-loaded sales pipeline.

Cause backloading the sales pipeline does not create full form of freedom. It usually creates heartache and tears. Now there are legitimate reasons why we might have a. Prospects say that they want to buy something at a certain time. Several of our clients who are in things like commercial real estate or SAS platforms who have prospects who are locked into contracts.

Yeah. Legitimately we may not be able to close that business for three, four or five months because of the contract that our prospect is in. There are ways around that, that we will talk about in a future episode, by. In general, we want our salespeople to establish very early with our prospects. When are they wanting to get something?

Because then we can start using that information to avoid backloading the pipelines. And when the prospect tells our salesperson that they need to push back, our sales person can use our prospect's own data to say, you know, we can certainly push back. But what I heard you say is you need an implement to, by this date to avoid these consequences.

I want to help you do that. But if those, if something has changed and those consequences have gone away or aren't as significant as they once were. Yeah. Certainly let's push things back. Going back to this idea around the sales year, we've got the sales pipeline, not back-loaded. So we've broken free of the hostage bond of a back-loaded sales pipeline, but we're still in a situation where our salespeople.

Once we get past may in using our example, they're really prospecting for next year. So how do we keep our salespeople motivated over the course of the current year, but also helping them see into the next year? Because I know when I was in. I had this mental block where I thought the world was going to end on December 31.

Maybe not literally, but I totally forgot that the next year, everything reset to zero. And the first couple of weeks were maybe a little panicky in terms of refilling my funnel. But if we've got a consistent, proactive prospecting plan, we understand what our sales cycle looks like. We can be adding to our funnels.

So we are consistently. Closing business every month of the year, even though our sales cycle can be six months or greater. And of course our sales cycle really doesn't end until we get paid. So in the example, we're using it seven months from hello to when we get paid. We can envision out into the future for our salespeople, what their year is going to look like.

That can be a little bit de-motivating for some salespeople, because they'll just look and say, well, I'm never going to hit my target. Why bother? And they start to get de-motivated. They possibly even start to look for another sales role that maybe isn't going to be as accountable as the one that we're holding them to.

The other side of this is we can. Find quick wins for our salespeople. And oftentimes there's quick wins in things like expansion opportunities. So diving deeper into current accounts and looking for ways to expand them out, which we talked about in one of our first 10 episodes. Another thing that a lot of our clients do and we do as well in, in my business in Calgary is we will circle back on opportunities that didn't get across the finish line.

Say six to as far back as 24 months. And rekindle the conversation or at least attempt to rekindle the conversation. In some cases, uh, the opportunities didn't cut it across the finish line. Well, we didn't really want to work with that organization either. And so we, we don't necessarily call them, but for the organizations where maybe they went with a competitor or.

We just got ghosted and there was really no clarity around what the next step would be going back to those primary contacts and attempting to rekindle the conversation. Oftentimes results in some really nice, quick wins that increase our. Person's motivation because they're starting to get some quick wins.

They get more excited. They want to get more quick wins, but at the same time, we are coaching them and holding them accountable. Adding in those ideal prospect opportunities into our funnel. May not end up closing for seven months, by the time we get paid. But at the very least, there's lots of opportunities that are being worked through the funnel.

So that funnel actually looks like a funnel instead of like a stomach and an antacid commercial. That's all bloated near the bottom with a lot of stuff. That's really nothing more than hope. It's smoke to keep our salespeople motivated and moving forward with creating full funnel freedom in our organization.

Coaching them on the idea of their sales year is very powerful to give them the insight that the things that they are doing today proactively may not pay off for awhile, but they will pay off eventually. And by giving them ideas and programs, campaigns to find quick wins in their current accountant. Or with opportunities that never got across the finish line, we're going to keep accelerating the amount of real viable opportunities into our funnel.

And by accelerating the real viable, qualified opportunities into our funnel, we're much more likely to surpass our targets for the year because there's continual forward motion in growing the top of the funnel. Successfully qualified in the middle of the funnel and then expanding our existing client relationships.

This has been the full funnel of freedom podcast. I've been your host, Hamish and Alex today giving you ideas and insights around the idea of the sales year and what that might mean for motivating our salespeople to not only continually proactively prospect, but also find some quick wins. Do like and share rate and review.

If you want to increase your sales with. Go-to full funnel, freedom.com.

How to Keep Your Sales Funnel Reliable