Why Turnover Starts at Onboarding 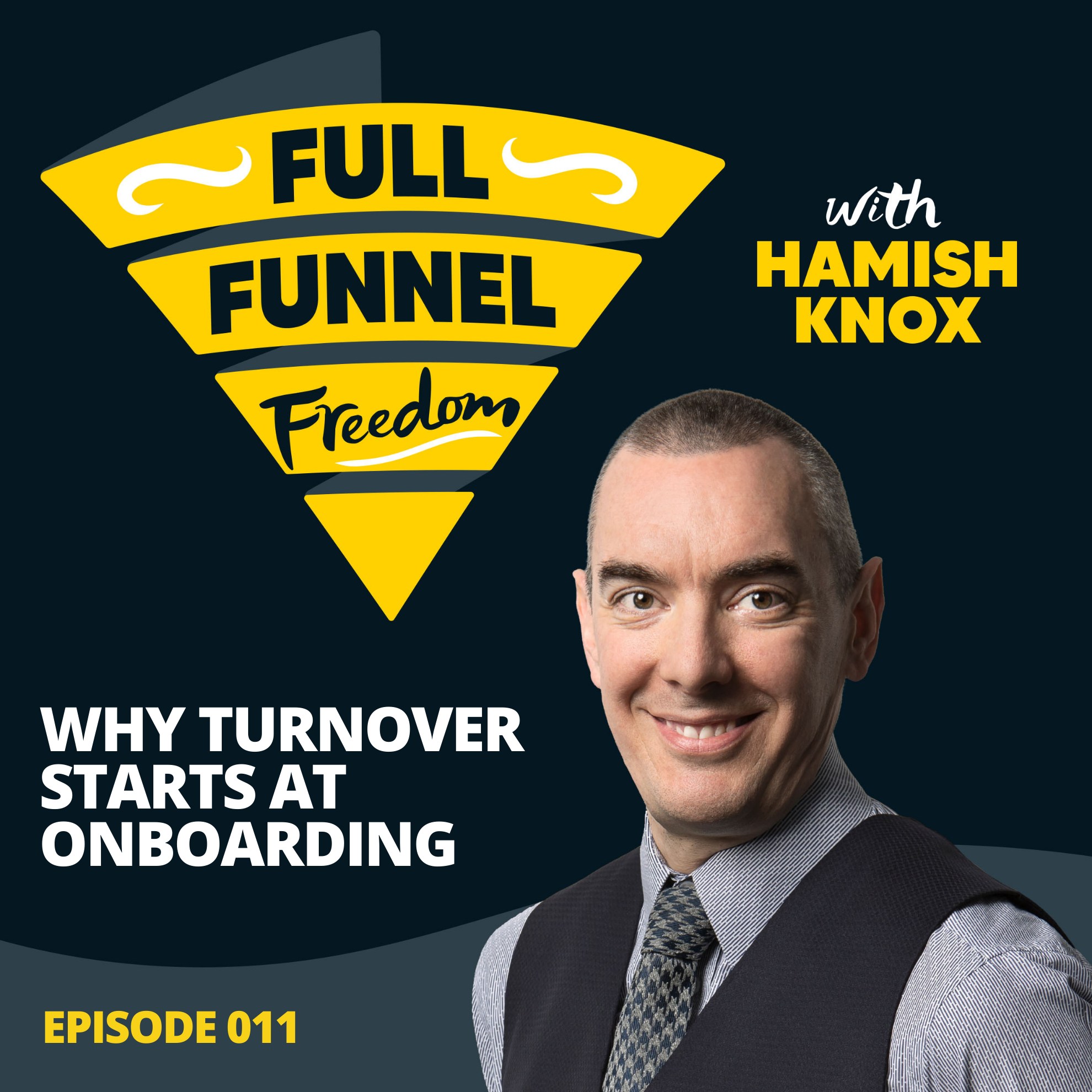 This is the full funnel freedom podcast, supporting sales leaders, and managers to improve their sales funnels from people to prospects. I'm Hamish Knox. In this show, you'll learn how you can improve your results. Lead a great team and hit more targets with full funnel freedom. Welcome to the full funnel freedom podcast.
I'm your host Hamish. In this episode, I'll be sharing ideas and insights around why your turnover is likely starting when you are onboarding. There's lots of numbers out there around what the cost of turnover are for one salesperson. And that's everything from recruiting, interviewing, onboarding.

Letting them stay in our team for however long that might be. And then eventually letting them go. It also counts. Opportunity costs are wasted time. The wasted time of other people in our, in our organization too, who have tried to support this person in becoming a productive member of the team, that it just didn't work out.

So it's probably a little bit less if you're listening outside of Canada, but still a significant amount of money that if we were going to gamble that, uh, we might want to be a little bit more sure that something was going to work in our favor, especially when we invest not only money, but time in members of.

Now typical onboarding the new hire spends the first day, filling out all the forms of HR, getting acquainted, finding out where they're going to be. If they're in a physical office and meeting the whole team, maybe you all go out for lunch. If you're able to do that, or at least have a, have a, uh, a zoom, a cocktail hour or something like that to get acquainted with everybody.

And then what often happens, especially in the before times. Is our new hire is going to go do some ride alongs with a current member of the team. Now it's not usually one of the people who's absolutely crushing it, or we might call them an A-player because, well, they're busy and we don't want to slow them down.

And some of them might not even want to support their new colleague because they might see them as competing. So we end up putting them with, uh, one of the B players that are solid, but not spectacular. And our new candidate goes out, new hire, goes out with this individual and that individual shows them the ropes and they tell them like it is, which we think is really good.

Cause they're, they're our new candidate, our new hire is going to learn. How to interact with our clients and our prospects. But what they're also hearing from our B player is yeah. You know, I know the boss says that we got to put stuff in the CRM every single day and our opportunity funnel has to be completely clean, but here's how the things really work around.

So instead of learning how to succeed, according to our process, that creates full funnel of freedom. We are being sabotaged unintentionally by a member of our team and our new candidate. Who's going to feel our new hire. Who's feeling a little bit of peer pressure from one of their new colleagues is likely going to follow along with what their peer says, as opposed to what we're telling them to do.

So in order to reduce. Your turnover for reasons other than performance or violations of personnel policies, follow these three steps. Number one, make sure everyone is on the same page before. So having your onboarding plan, documented and shared with your potential new hire when they're still a candidate after they've gone through a couple of layers, we're getting closer towards the end of where we might make them an offer share with them what their onboarding plan looks like.

Whether that's 12 weeks, 24 weeks, what are they going to be required to do in terms of specific, measurable, observable activity? Both in terms of onboarding, learning what it's like to be a successful member of our team, but also in terms of activities, I mentioned in a previous episode, if we can't see our new hires in the first three weeks, not only sticking to their onboarding plan, but also adding.

Once they've accepted your offer. And get them onboarded earlier to reduce their time to self-sufficiency, which I'll touch on more in a minute. Number two. Have that onboarding timeline, not only clearly documented, but include what role specific skills are you looking for your new hire, especially in a sales role to demonstrate as they go through their onboarding plan.

In week four, it's unlikely that we're going to drop them into demonstrating how to do a demo of our product. That very well might happen in week six, week eight, maybe even week 10, but by the end of week two, they likely can be able to do at least a elevator pitch or even do a role-play a prospecting call or asking for an introduction or having an expansion conversation with an existing client.

Every week, these skills build on each other. Another benefit of having this all documented and sharing it well in advance is the true rock stars who joined our team are going to get ahead. They're going to want to show us how awesome they are and that we made the right choice in bringing them on board.

So while we may be asking them at the end of week three, to demonstrate a specific skill, not only can they do that, but they could also do week four and maybe even week five. If we ask them to number three, In terms of reducing your turnover caused by bad onboarding is to set clear performance expectations right upfront.

And by this, we tell our clients to use a map for their people, which is a minimum acceptable performance. By the end of week one, we expect that you will have done these specific activities in this specific amount. Now that may be five calls to client that this new hire is taking over. Doesn't matter what the specific activities are, but we want to see from day one that our hire has the right ambition and drive to be successful with relatively simple, straightforward activities that they're going to be doing regularly.

Anyways, should they pass probation now? You may not necessarily know. What your map should look like. That's where if you have an existing team and you have a data set available, you can start putting some benchmarks together. You may need to start those benchmarks with this new hire. However, in the future, by having.

In their role without us having to directly supervise them. So if we can reduce that time to self-sufficiency, the payoff to our organization can be exponential in terms of opportunities, revenue, new clients, new expansion opportunities, because our new hire is up to speed that much faster, and the payoff to us as leaders.

And if we have a management layer in between us and the salespeople to our managers, Is huge in terms of time, because the faster we can get our new hires up to self-sufficiency the more time we have back in our days to focus on strategy, supporting our team, possibly bringing on the next awesome member of our.

One other way that we can really support our new hires in onboarding successfully is to role play safely. There's an article I wrote many, many years ago. Well, before, uh, I got into the development business. About how role-play is the single most horrifying thing in the world. And it was because I had a bunch of bad managers doing bad role play on me, and they were really just getting their emotional needs met and making me feel like I was completely useless.

So when we are role-playing, especially with new hires, what we're likely going to be doing is we're going to be taking on the role of salesperson, because whether that new hire. Is a brand new graduate who really has no experience in business to business sales or limited experience, or they're someone who's got some industry experience, but they don't know how we sell.

Our process is what our system is. They are not aware of how we create full funnel freedom. So we as leaders, it's our job to model that for them mentioned in a previous episode as leaders, our number one job is to create clarity by role-playing safely and taking on the role of a salesperson in our organization.

So our new hire can learn from us. We are going to role play safely, and we're going to again, reduce that time to self-sufficiency eventually. We're going to flip the script and our new hire will be demonstrating that they can perform and role play as a salesperson successfully using our methodologies.

But initially we want to be taken on those roles so that we can show them what it looks like to sell successfully for us. This has been the full funnel freedom podcast on why turnover starts at onboarding and the four ways that we can minimize that. Number one, by making sure everyone is on the same page before day one, number two, documenting the onboarding timeline with skill demonstrations, weekly that build upon each other.

Number three, setting a map, a minimum acceptable performance level. Ideally using benchmark from current members of the team. And number four role-playing safely. I've been your host Hamish Knox. Thanks for listening. Please share, rate and review until we connect with you on the next episode. Go create full funnel freedom.

Thank you for listening to fall funnel freedom with Amish knocks. If you want to increase your sales with ease, go to full funnel. Dot com.

Is Your Sales Year Already Over?