Two Responses to "Send Me a Proposal" That Stop Funnel Bloat 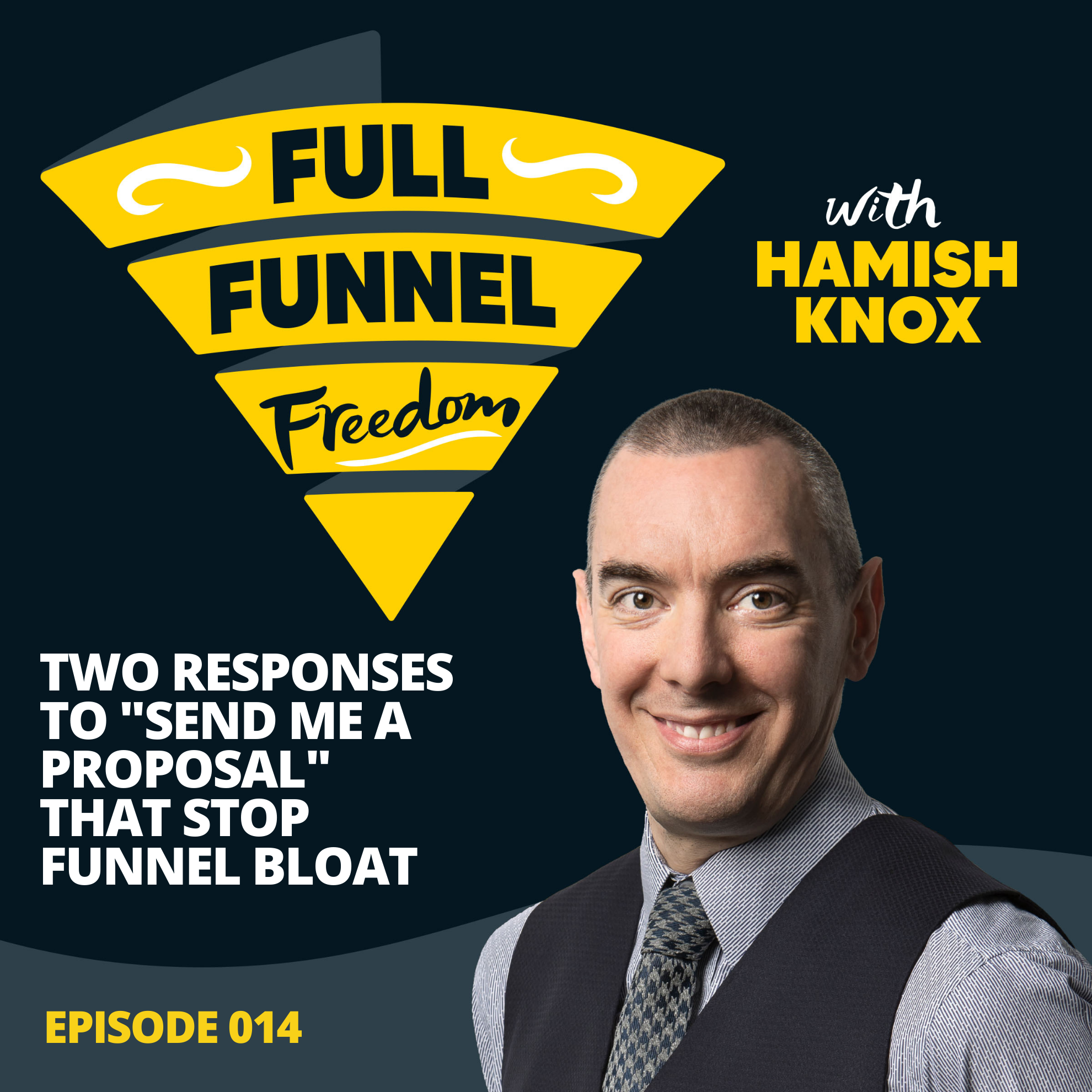 This is the full funnel freedom podcast, supporting sales leaders, and managers to improve their sales funnels from people to prospects. I'm Hamish Knox. In this show, you'll learn how you can improve your results. Lead a great team and hit more targets with full funnel freedom. Welcome to the full funnel freedom podcast.
I'm your host. Hamish Knox. In this episode, I'll share ideas and insights around two responses to send me a proposal to teach your salespeople so they can stay in control of their sales process for as long as possible. Our prospects have been trained to say to salespeople, Hey, can you send me a proposal?

They have learned that when they say that a sales person is likely to say, okay, runaway fire them an email a day a week or whatever later, and then we never get back to them. Heck I do it when salespeople call me, I'm sure you do it when sales people call on you. So. We teach the leaders we work with to instill these two responses in their sales team so they can maintain control of their sales process for as long as possible.

And keep that funnel, looking like a funnel instead of starting to bloat in the middle, like a stomach in an antacid commercial. The first response is the coal bill. Prospect says, send me a proposal. And our salesperson says happy to do that. What do you want that proposal to look like? Now? Their prospect is not used to getting a response back from a salesperson.

When they say, send me a proposal to ask, what do you want it to look like? So they're probably going to say, well, what do you mean train your salespeople to say, well, I can certainly go and build a proposal in a vacuum, but there's really two parts of this conversation. There's yours and mine. And if I just go away and build it by my.

Very happy to do it, but I'd rather make a good use of both of our times by I'm not sending you something that may end up missing the mark. How does that sound? Well, at this point in our prospect really only has two choices. They can reveal themselves to be a suspect and say, no, no, no, no. If you want my business, just, you know, go back and come up with your best shot.

You better sharpen your pencil and then tells our sales person that well, unlikely to get that business. And even if we do, if this is how our prospect is going to treat us while we're dating, what is it going to be like when we actually decide to get married? So the coal build is a really, really powerful response to a prospect because it allows our salespeople to maintain control of their sales process.

Ask some more questions and by getting the prospect to be involved in the proposal building process. They're more likely to own whatever we put forward doesn't mean that our salesperson is going to close the sale a hundred percent of the time. But what it does mean is they're more likely to differentiate on how they're selling instead of what they're selling and create additional rapport with their prospect, because they're giving the prospect the respect that they deserve to build a solution to their issue, by the way, our prospects, more often than.

Have a solution to their problem in mind before they ever engage with a salesperson. So a really great question too, for our salespeople to ask is, so how are you seeing as a solution to this. When they've started doing some qualifying with their prospect and built a little bit of rapport, it's very difficult for a prospect to say, I don't know, you're the expert.

I just figured you'd come in and tell me, because if we take this out of the business world and go into the personal world, when we go see a specialist in our personal life, whether it's a general practitioner or a medical specialist, we've got some idea of what we want the solution look like. Now that solution may not exist in any form of reality.

Our expert will share that with us. But if we go back into the business world, our salespeople can unintentionally step off side with their prospects because they essentially say, well, that's, that's your vision. Okay. That's great. Let me crumple that up and toss it over in the corner. And I'm going to tell you how we're going to solve this problem.

All that does is make our salespeople come off like cheesy slimy, aggressive salespeople, and not the trusted advisors that our prospects want to do business with. So. Salespeople to code, build proposals with the prospect. And if they have to go back and summarize it great, but at least there's going to be no surprises on either side.

Once that proposal goes over to the prospect, the second response to send me a proposal and is very, very powerful for keeping our salespeople in control is reviewing a graph. This is particularly helpful when. We are in a long enterprise sales cycle, and we need to go back to our organization to get information from another department.

Maybe it's engineering, maybe it's operations implementation doesn't matter, but we can't co build because there's information either on our side or our prospect's side that we are missing, or we don't have in the moment we need. Go back. So coach our salespeople, when the prospect says, Hey, send me a proposal.

Salesperson says happy to do that. What I find is once I send the proposal over, there's usually four or five, maybe six questions that you're going to have instead of us going back and forth by email a whole bunch of times and spending hours and hours responding to emails. What if I put together a draft?

Come over. We can review it together in real time. I can make any adjustments that are necessary. And then I'll send you over a finalized version. How's that sound to you? Very difficult for our prospect to say no to that again, without revealing themselves to be a suspect, our salesperson is positioning everything in a way that's very, very respectful to their prospect and their time, which for all of us is our only.

The minute our salesperson hits sin on our proposal or uploads it to our client vendor portal. We've lost control of the sales process because now it's purely in the prospect's hands. However, by. Cole building or presenting a draft. We can maintain control of that process for as long as possible. And now given that most of our proposals are presented remotely, we can also leverage the screen-sharing abilities to again, maintain control of our sales process for as long as possible.

One of my clients very early on when I started in Sandler. And this is back in the very, very early days of video calls. Once we started working together, they would actually save the proposal until their client who was oftentimes overseas, many, many hours apart. And once that individual joined the call only then would our client send the proposal over to them and review in real time?

And they never had anyone say, oh, got the proposal. Thanks very much and hung up on them. They actually reviewed it. Well, now that we have screen-share abilities and, and other ways of keeping our information on our side until we've actually got to the point where we believe we have a really good shot of getting our prospects business.

Now, when we get on a video call with our prospect, share the screen, we can flip through the proposal as much, or as little as they like, we can even let them drive. Show them the, the table of contents or, or, or give them a set of chapter headings and say, Hey, where do you want to start first? Letting them guide the process for us is a really great way to make our prospect feel more like a part of the solution instead of someone who's just getting pitched to.

So to reduce the amount of bloating in your funnel, teach your salespeople to either code, build, or review drafts of proposals with. Prospects. Whenever they hear, Hey, can you send me. This has been the full funnel freedom podcast. I've been your host Hamish Knox. Thanks for listening. Please share, rate and review until we connect at the next episode.

How to Keep Your Sales Funnel Reliable

4 Phrases Salespeople Use That Kill Their Credibility